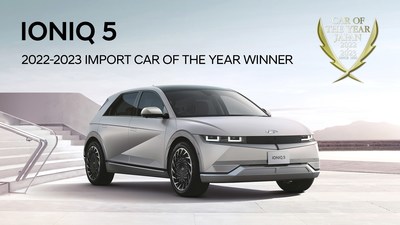 As the first model of Hyundai Motor’s dedicated battery electric vehicle (BEV) brand, IONIQ 5 received one of the most prestigious accolades in the competition, beating BMW iX, Land Rover Range Rover and Renault Arkana, which were also named as the 10 Best Cars of the Year. This is the first time for a Korean automaker to win an award at the JCOTY.

Japan Car of the Year was established in 1980 to name the 10 Best Cars of the Year and final winners for each category after test-drives and final votes from Japan Car of the Year’s Executive Committee. Vehicles released in the Japanese domestic car market between Nov. 1 of the previous year and Oct. 31 of the current year are eligible for the annual competition. Earlier in November, IONIQ 5 was selected for the 10 Best Cars for 2022-2023* from among 48 candidates.

“IONIQ 5 signals a bold new direction in electric mobility for customers in Japan and around the world. Already the winner of prestigious global awards, including World Car of the Year, to be recognized in Japan is a significant achievement, especially against such strong competition,” said Won Sang Cho, CEO of Hyundai Mobility Japan. “Since it went on sale in Japan earlier this year, IONIQ 5 has received positive feedback from consumers who have praised the IONIQ 5’s design, engineering and excellent driving range. We will continue to strive to contribute to the future of the mobility with sincerity and humility for the Japanese market.”

More information about Hyundai Motor and its products can be found at: