IDTechEx Was Right About Whether Tesla Would Re-Consider Radar

BOSTON, Dec. 15, 2022 /PRNewswire/ — Roughly one year ago, Tesla announced that it would be dropping radar from Model 3 and Model Y production vehicles starting May 2022. At that time, IDTechEx wrote an article about why dropping radar was a mistake. Nearly one year on, it looks like Tesla is getting close to readopting radar, so what changed? For one thing, IDTechEx’s “Automotive Radar 2022-2042” report found that radar technology has improved significantly over the past decade, and the radar Tesla was using is now looking quite dated. 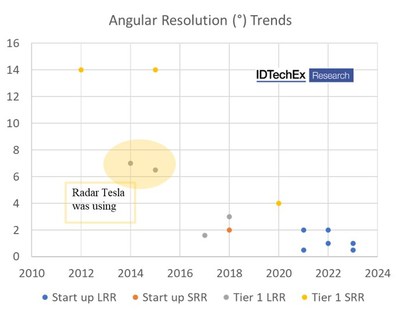 Radar has been a fundamental component of advanced driver assistance systems (ADAS) for more than 20 years. Radars use radio waves with an FMCW (frequency-modulated continuous wave) coding system, which allows them to accurately measure the distance and relative velocity of objects in their field of view. This is an invaluable tool for maintaining a safe following distance to the car ahead when using adaptive cruise control systems. The alternative is to try calculating distance using multiple cameras and some moderately complex maths or an AI algorithm. Neither of these tends to be as accurate or reliable as a radar. Cameras are also vulnerable to harsh lighting, darkness, heavy fog, and other tricky visibility conditions.

One of the reasons that radar is so useful is that it is not particularly affected by things like snow, fog, dust, and other occlusions that cameras can struggle with. Since it emits its own radio waves, it works equally well at night and does not care about intense sunlight on the lens. This makes it a very robust sensor and a highly recommended tool for developing an autonomous vehicle capable of operating in a wide spectrum of weather and lighting conditions.

Radar is not without its faults though. Most people are familiar with how radar is depicted in old war films, with a rotating dish that reports amorphous blobs on the radar screen. When Tesla were shopping for radars while developing its 2016 hardware suite, the options on the market were only a slight improvement over that. It could be very difficult to know exactly what the radar was picking up and this could lead to a phenomena known as phantom braking. A phantom braking event is where the radar picks up an innocuous object with a strong reflection, for example, a manhole cover, mistakenly flags it as a stopped vehicle and puts the brakes on to mitigate the effects of a crash. This can be overcome by fusing data from cameras around the vehicle with the radar information and using the combined output to correctly identify that the detection was a false positive.

Tesla’s ADAS features have always been designed around a vision system, with vehicles typically using eight cameras to monitor the environment. The performance of the vision system was growing quickly through software improvements, and the radar was shifting from being a crutch to more like a shackle. Tesla felt it could train the camera system on good radar data, then ditch the crutch.

This certainly bucked the trend within the industry; IDTechEx’s “Automotive Radar 2022-2042” found that most vehicle manufacturers tended to be adding radars to more models in their lineups and adding multiple radars to their most advanced vehicles. Take the new Mercedes S-Class, for example, it is one of very few level 3 (of SAE levels 0-5 of automated technologies and the first level at which drivers do not need to pay attention) automated vehicles, and it has five radars! Tesla’s argument was always that humans can drive with just two eyes, therefore, a camera system is sufficient, but it’s not like we have a choice. Adding superhuman capabilities to the vehicle in the form of radar seems like an obvious step when trying to improve automotive safety and develop more advanced automated driving features.

Well, one year later, it appears that Tesla has changed its mind. The exact news is that Tesla has asked the FCC (federal communication commission) for a short-term confidentiality extension on its HD radar documentation. The FCC test radars from all the tier-one suppliers, like Continental and Bosch, as part of the certification process. Tesla having a radar tested with FCC is interesting, but not a guarantee that it will be putting them on future vehicles, although IDTechEx thinks that it is highly likely they will. It is also interesting because OEMs do not typically develop their own radars; they are normally bought in packages from the likes of Continental, Bosch, ZF, Denso, and so on. So it will be interesting to see what Tesla have come up with when details are released.

Currently, the established tier twos, who make the components for tier ones to assemble radars, are transitioning from silicon germanium bipolar CMOS (SiGe BiCMOS) technologies to silicon CMOS (Si CMOS) technologies. This technology change enables new 4D (elevation, azimuth, distance, and velocity) imaging radars with a significant performance increase over previous generations. 4D imaging radars get around some of the shortcomings that led to Tesla dropping radar in the first place, and so it is likely that if Tesla do indeed readopt radar, it will be of the 4D imaging variety. Currently, 4D imaging radars are emerging as an off-the-shelf option from tier ones, but the really advanced and innovative stuff is being done by start-ups such as Arbe and Uhnder, whose technologies are extensively covered in “Automotive Radar 2022-2042“. IDTechEx is very curious to see what path Tesla are going down, whether it be some adoption on a tier one unit, a Tesla designed unit using tier two products, or something else.

One possibility is that Tesla could design its own radar transceiver (the key component in a radar). When the pandemic hit, and computer chip supply started to impact the automotive industry production, Tesla designed its own silicon to power its ADAS system and had it manufactured by Samsung. Radar start-ups that design their own transceivers, such as Arbe and Uhnder, tend to be fabless. This means they design the circuits, then get someone like GlobalFoundries to build the chips. IDTechEx does not think there would be anything stopping Tesla from doing this, and with Tesla’s history of vertical integration, it would not be too far-fetched.

Having already dropped radar from production, if Tesla decides to reincorporate it, it could cause them a headache. Since 2016 Tesla has said that every vehicle was built with all the hardware needed for autonomous driving. When radar was removed from production, the following software updates essentially disabled the radar. If a new radar is added, what happens to all the vehicles without radar, and all the vehicles with an old, lower-performance radar? Surely they will not have all the hardware needed for “full self-driving”? Will Tesla be retrofitting updated radars? Will owners get refunds on the rather expensive “full-self-driving” optional package?

This has already bitten Tesla once before. When it updated its onboard computer, those with older models and had purchased the FSD option were offered a free computer retrofit to be able to keep up with the ever-changing software. However, Tesla then began offering a subscription package for FSD, but customers without the updated computer would need to pay US$1,000 for the retrofit before being able to pay for the subscription. Tesla were recently ordered to perform the retrofit for free in these cases. This should serve as a warning for companies tempted to over-promise and under-deliver.

All this business of promising the hardware will be sufficient in 2016, and then conducting multiple hardware changes since 2016, certainly makes things a little complicated. We will be waiting to see what happens if Tesla are indeed fitting a new, upgraded radar. Regardless of what happens next and how Tesla proceed with its new radar endeavor, IDTechEx can be relied upon to give detailed dissections of future developments through its portal and subscription packages.

Another question raised by this move is, “what about LiDAR?”. LiDAR uses laser light to find range and build 3D maps. It can do this with better accuracy and imaging potential than radar but comes at a higher cost. Many robotaxi developers have been using LiDAR for their highly automated vehicles, but Elon Musk, Tesla CEO, has famously dismissed them as “a fool’s errand“. He went on to add, “Anyone relying on lidar is doomed. Doomed! [They are] expensive sensors that are unnecessary.“. However, these statements have not aged particularly well. LiDAR has come down significantly in cost over recent years, with many options becoming available in the US$500–US$1000 range. While this is still expensive compared to the ~US$100 of radar, it would easily fit in the new US$15,000 price tag of Tesla’s FSD package. Others, such as GM, Volvo, Mercedes, BMW, and more, are now adopting LiDAR, and IDTechEx’s “Lidar 2023-2033: Technologies, Players, Markets & Forecasts” anticipates strong growth in LiDAR over the next two decades, particularly in automotive.

We are yet to see precisely what Tesla are planning for its radar. IDTechEx strongly suspects we will see the re-introduction of radar onto Tesla vehicles next year. Radar has proven itself invaluable to many OEMs in pursuit of the most advanced ADAS systems. IDTechEx’s “Automotive Radar 2022-2042” report predicts that its adoption will accelerate drastically in the next ten to 20 years. Tesla’s trend-bucking move to ditch it came as a surprise to lots within the industry; IDTechEx said it was a mistake at the time, looks like we/they/it might have been right all along.

IDTechEx is actively researching MaaS and autonomy and has just released an updated report, “Automotive Radar 2022-2042“.

This research forms part of the broader mobility research portfolio from IDTechEx, who track the adoption of autonomy, electric vehicles, battery trends, and demand across land, sea and air, helping you navigate whatever may be ahead. Find out more at www.IDTechEx.com/Research/EV.